How did Piles Copse come to be where and how it is? Here’s a brief history of its last 4000 years…

It is currently understood that by about 2000 to 1500 BC most of the tree cover had been cleared and Dartmoor had become an important area for the grazing of sheep and cattle. The survival of small oak woods at Piles, Black Tor and Wistman’s, remains something of an enigma.

In the Bronze Age, from about 1800 BC, there was increasing population on Dartmoor, so that slash and burn agriculture deforested the moor significantly after around 1000 BC. There are remains of a number of settlements and enclosures from this period in the Piles area. By 500 BC, when the climate started to cool, moorland was in existence and woodland cover already limited. The Roman and dark ages periods had little impact, but there were some high level Saxon settlements.

The next thousand years

Harford, the parish in which Piles Copse lies, appears to have been a manor in Domesday, but at that time the moor may have been used mainly for hunting. After that, tin streaming had a profound effect, with a boom in the 12th century and a consequent increase in population on the moor for some time. Marginal farms around the moor were deserted after the Black Death. There was a further rise in tin exploitation in the 15th and 16th centuries.

At some point, two of the abandoned Bronze Age settlements at Piles were developed into farms again. More significantly, huge new boundary walls were also built to separate large holdings from the open moor, now known as Lower Piles and Higher Piles. It seems most likely that the two Piles farms date from either of the boom periods around the 12th and the 15th to 16th centuries respectively. Some of the wall around Lower Piles takes the form of a corn ditch, more like the boundaries with the farms lower down the valley, but where it is steeper and rockier, as around Higher Piles, this was clearly not possible.

Certainly the Piles farms are both too big to have been a medieval newtake, of the sort most common in Dartmoor Forest. But deeds exist of the Piles farms from before the time of the next wave of newtake creation. This was in the late 18th century, when a larger type of newtake emerged, and at this time and on into the 19th century there was a strong movement towards enclosing very large areas of central Dartmoor in order to “improve” rough moorland to rich pasture. Between 1820 and 1898 it was estimated that more than 6,070 ha (15,000 acres) on Dartmoor had become newtakes. But as deeds exist of the Piles farms from before this period, it is clear that they were older establishments and not newtakes. Also, the size of stone used in the construction of the massive wall around Higher Piles – in some cases not far short of the size used in the herculean walls of ancient Greece – required inputs of labour that could not have been affordable in this part of England even in the 18th and 19th centuries (except possibly by Napoleonic prisoners-of-war). It appears most likely that Higher Piles was enclosed sometime in the middle ages, but by whom and exactly when, remains unknown.

In this context, the oak copse in Higher Piles is most likely to have been planted around the 16th century, when there is known to have been a shortage of small oak coppice and underwood in south-west England, mainly as a result of heavy use in tin smelting.

The deeds show that the Piles farms both had recorded common rights on the surrounding moors from at least the 1740s. Following lengthy disputes, there was a redefinition of boundaries for Harford and its neighbouring moors in the 18th century. Stone pillars were erected that still define them physically. The 1838 tithe map shows the two Piles farms as large fields, walled in like the other enclosed farmland. Harford Moor was well defined by that time. The abandonment of the two farms, and the start of decline of the boundary walls, seem to have happened sometime in the 19th century.

In 1867 the Duchy of Cornwall sold Harford and Ugborough Moors, along with Higher and Lower Piles, to the Rivers family, who owned Stowford estate, which is the old manor of Harford. Grazing rights were explicitly transferred, and mineral rights excluded. It is not clear from the 1867 deed as to whether the Piles farms were inhabited at that time, but the implication is that they were not. The Stowford estate and the moor were purchased by James MacAndrew in 1878, to add to his holding of the Lukesland estate that he had bought three years previously. Lower Piles was sold off sometime between 1867 and 1929, and has remained in separate ownership. 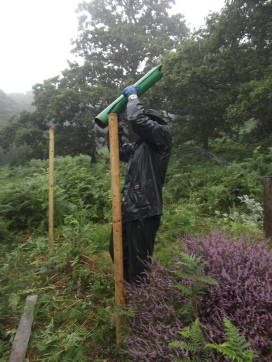 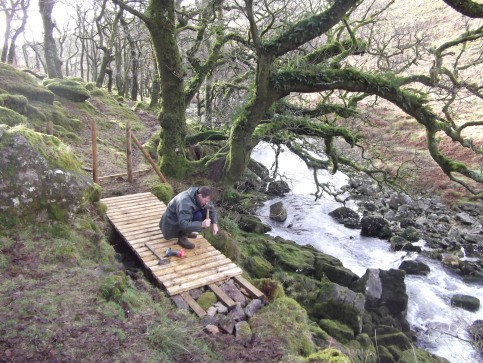